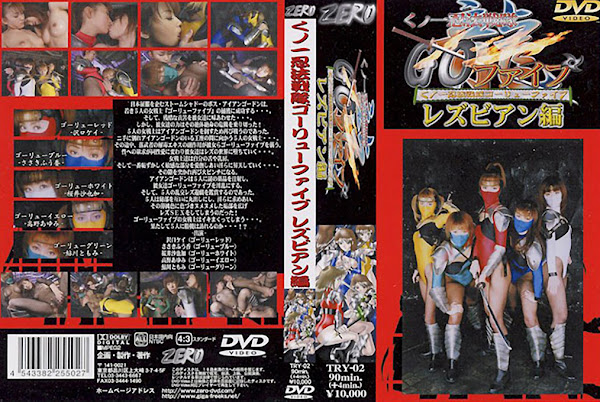 Iron Gordon is a boss of the Strom-Shadow that plots to conquer Japan， and finally he succeeds in capturing five young female warriors ”The Goryu-Five”... And he gives cruel torture to them... But their power overcomes this imminent danger! The five female warriors again fight to beat Iron Gordon. The five female warriors separate into two groups and go toward a king’s room where Iron Gordon is supposed to be... On the way， the Goryu-Five has an attack of side effect of detoxification extract caused by some surviving soldiers’ poison. Their sexual desire turns into desire of lesbianism， and they fall into a world of lesbian... The female warriors are petting their most shameful and sensitive spots such as their tongues and tits， and they go to reach acme so obscenely. And they’re caught their guard off and are driven into deadly pinch again. Iron Gordon injects mysterious drug into the Goryu-Five and makes them so dissolute. And he enjoys watching their lesbian orgy play. The five of them totally expose their secret spot each other and seek their bodies so obscenely， and they have lesbian sex while they are spreading their shameful sticky wetting spots that have being turned into light peach color! The female warriors of the Goryu-Five keep reaching acme so many times... Well， is it possible for them to catch a chance of winning...!?