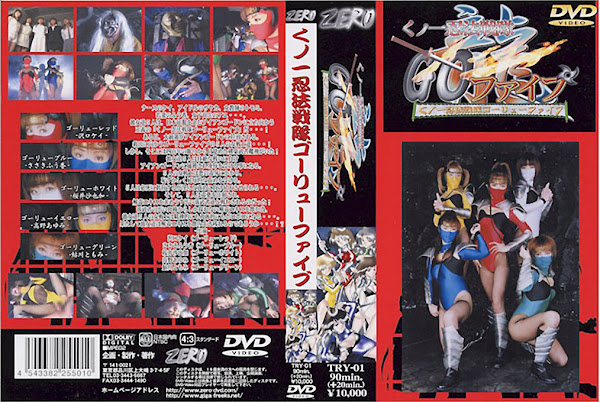 There are five different kinds of girls: a nurse KEI， a cute， young pop star SAYAKA， a teacher TOMOMI， a young housewife FUUKA， a high school student AYU... They belong to a group of justice heroines named ”The Female Magical Ninja Unit Merging-Five.” And It has a mission to fight against ”Iron Gordon” who is plotting to conquer Japan...! One day the president was kidnapped by Iron Gordon. Five female warriors of the Merging-Five went forward the President’s rescue...! However， an evil samurai master fencer who just woke up from four hundreds years ancient slumber was facing to them! Five female warriors miserably lost the fight against him， and they were captured and about to surrender by Iron Gordon. It meant that they were definitely trampled in his hands， and they had to go through some disgrace. Those five girls frantically resisted against Iron Gordon， but they couldn’t hold his tortures and reached the acme without their will... In addition， they all were injected some poison and forced to fight against poor surviving samurai soldiers in order to get some detoxicant extract that those soldiers obtained! Those five female warriors were mentally and physically torn apart for the sake of swallowing the detoxicant extract that was actually only capable to take out from dirty meat poles of the poor surviving samurai soldiers... Is it possible for those girls to swallow the detoxicant extract and survive it...!?