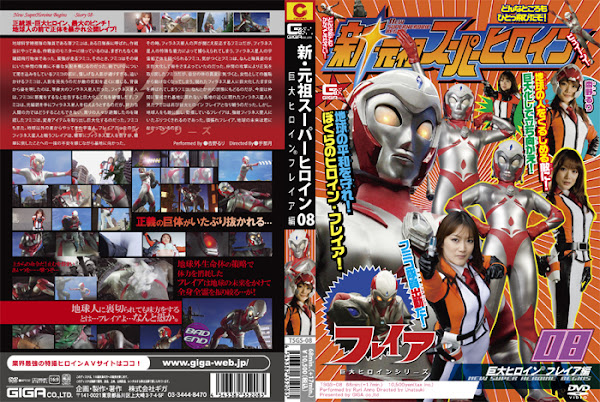 A member of the Earth-Science-Special-Work-Unit， Fumiko Sawa(means stepping into a mountain stream)is called by her captain one day and comes to the operation room. What she sees in the monitor of the operation room is， without doubt， an unidentified flying object. Some strains run through Fumiko. Then， Fumiko feels some doubtful signs for a member of her fellows who is on this occasion. Later， some doubtful figure goes past before Fumiko who is inquiring information about UFO in the town. Fumiko pursues but misses the figure， while she feels the enemy’s signs near by. And suddenly， from her behind， a life-sized the Filaness-Star Alien appears. The Filaness-Star Alien warns her not interfere its plot， and it enlarges itself， beginning to devastate the town. Fumiko grabs her ray gun to obstruct the Filaness-Star Alien， but she cannot do anything with a powerless human being’s power. So Fumiko takes out her transformation item and enlarges herself after she checks the surrounding people to be evacuated. Actually， Fumiko is also an alien called the Freia who has come from a star other than the earth. The Freia fights against the Filaness-Star Alien and easily beats it. Then， she heads to her base， but she feels uneasy of having pushed it down simply. And suddenly， Fumiko hears the Filaness-Star Alien’s voice and reacts to it， but she’s captured with the special ability of the Filaness-Star Alien. In the spacecraft of the Filaness-Star Alien， Fumiko’s body is thoroughly investigated. On the other hand， when she wakes up， she notices that she is wandering around the town while she is enlarged with the member costume of her special unit. She regains senses by her fellows’ attack， but she cannot move at all， because she notices uncomfortable feelings in her body， which has been done by the enemy’s body investigation， and naturally she feels the shame as a woman. Then， Fumiko is played in the large figure by the Filaness-Star Alien who appears there. Somehow， she succeeds in returning to the original figure， but now her fellows look out her and she cannot return to the unit’s base. Fumiko finds the Filaness-Star Alien who appears near by the unit’s base， and again she enlarges herself into the Gigantic-Heroine， the Freia and fights against the enemy. However， the earth people also turn into her enemy and the Freia is emotionally shaken， and now she is totally humiliated by the formidable enemy， the Filaness-Star Alien. Keep a stiff upper lip， the Freia! The future of the earth depends on you! [BAD END]