TBXX-03 The Action Show Surrender an Actress in a Suit 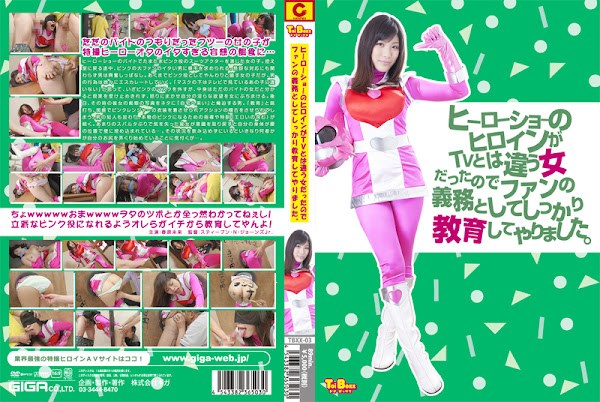 The heroine for the “Go Saber Show!” is absent， so they employ a substitute in a hurry. The girl is asked to wear the costume and act. After the show， she is exhausted because it was her first time performing in an action show. Saber Cosmos is asked for a handshake by her passionate supporter while she is returning to the dressing room. But the supporter is over-excited about being able to meet Sailor Cosmos! He wants to touch her! He jumps on her screaming， “She’s real! She’s real!” He doesn’t listen to a word the actress says. His actions escalate and he takes her helmet off but that was when he realized the actress isn’t the person he had expected. The man screams ’How dare you trick me! Who are YOU? What did you do with my Misaki’ He begins taking pictures of the woman with his smart phone. He brings her to his room and dresses her up as Saber Cosmos. He commands her to take a pose and tells her how this is a rehearsal. And a friend of the man appears and he also gives her a lesson using a vibrator and passes out soon after. When she wakes up， she finds herself inside a wall. Confused of the situation， she feels someone’s presence behind her back... [BAD END]