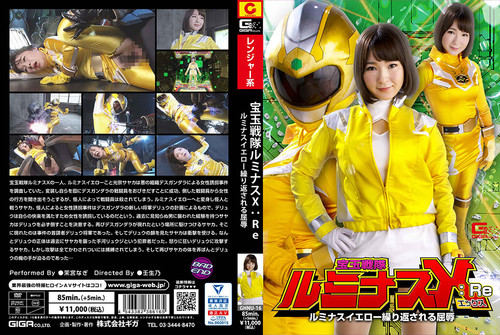 One of the treasure squadron Luminous X, Luminous Yellow, Gwangjong Sayaka, was investigating the kidnapping of a woman by the evil organization Death Gandara. Succeeded in disguising himself as a decoy to lure the Death Gandara fighters, and tries to find out the whereabouts of the woman from the defeated fighters, but the fighters are killed by the monster. Sayaka transforms into Luminous Yellow and fights against monsters. According to the Phantom, the kidnapping of a woman was planned by Desgandara's new general, Delyu, who is kidnapping a woman to satisfy his pleasures. Sayaka, who has been attacked by a stranger in the past, decides to defeat Delyu. Sayaka rushes to the place where Death Gandara appears again. What appeared there was General Delyu, the mastermind of the case. And Sayaka who sees Delyu's face is shocked. The true identity of Delyu was a criminal named Ryuji Tegawa who attacked Sayaka in the past. Sayaka attacks Delyu with anger. However, all attacks are evaded and eventually captured. And again, when Sayaka's body was played, Delyu's devil's hand approached ...[BAD END]