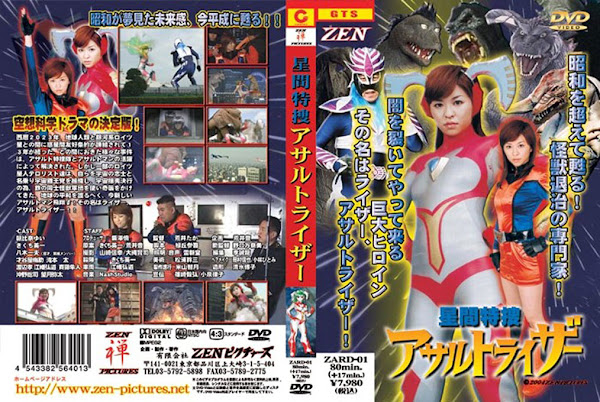 It is the year 2023. 13 years have gone by since a friendship treaty between the people of Earth and Planet Roitz of the Galactic System was signed. The various incidents that occurred during these years were solved by the heroic works of the Assault Special Investigation Unit and Assault Man. However， some terrorists of Roitz， who call themselves Space Loyalists organize a Space Imperialist Party， and launch a surprise attack using an army of like-minded iron monsters， in order to carry out the extermination of the entire galaxy， except themselves. In order to protect peace on Earth a new hero makes her appearance! Her name is， Assaultlyzer!! Mine Lyzer（Yui Asahina） She is a squadsman of the Assault Special Investigation Unit. She used to serve as a member of the security force for the Imperial Family of Planet Roitz. She is the new Assault Man who takes the place of Edlyden. She is a hard worker and transforms into Assaultlyzer Yutaro Arashi（Eiichi Kikuchi） He is a squadsman of the Assault Special Investigation Unit. Although he is stubborn， he takes good care of others and is very reliable. He is a conventional， fatherly type character， and has an incredibly wide range of friends. He is also a master of the Japanese sword， who is capable of charging through a shower of gun fire with his sword alone. He has a wife and a 6th grade son， named Taro Arashi. Takeshi Yagi（Kazuo Yagi） He is a squadsman of the Assault Special Investigation Unit. He is an energetic and passionate character. His favorite food is curry and rice. A.S.S.A.U.L.T Assault is an organization within the Interplanetary Ministry of Health， Labor， and Welfare， that is in charge of interplanetary crime control. It collectively refers to a special organization that investigates and takes care of crimes occurring among the planets. Their activities include a wide range of things， such as getting rid of huge disastrous creatures， which are hazardous to the safety of space， and so on forth. Depending on their mission， the members are divided into the Assault Special Investigation Unit， the Assault Task Force， the Assault Security Unit， etc. The chief administrator of this Interplanetary Welfare Bureau is Yutaro Arashi.