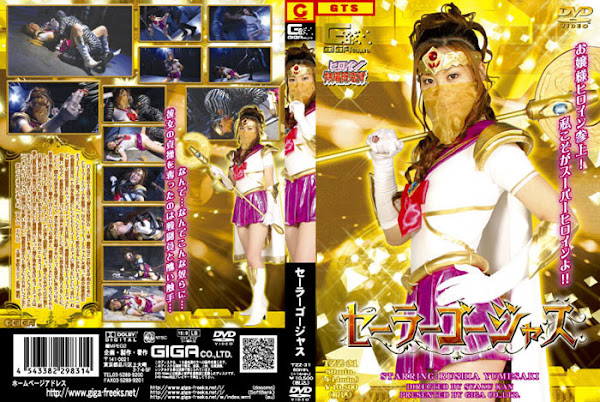 Reika was a sole daughter of a prominent extremely rich named ”The Ogimoto Foundation” in Japan. For keeping the peace she decided to use her financial power and developed a gear called the Sailor-System， and she gave her name as the Sailor-Gorgeous and fought against an evil association named the Killer-Queen. On the other hand， combatants of the Killer-Queen， who were totally beaten by the Sailor-Gorgeous， wholeheartedly deserved to knock down the Sailor-Gorgeous， so they tried to put their power up with a gear called the Supernatural Power Developing Equipment. While combatants were fight against the Sailor-Gorgeous， they succeeded in repelling her deadly blow with their supernatural power and they captured her marvelously. And， for dispelling their long lasting grudge， they wrapped her with some ropes that would shrink with water. The Sailor-Gorgeous twisted her face so badly with some pains caused by ropes which gradually tying up her crotch and tits， and also she had to feel so miserable by punishments of poor combatants just as they wanted. After that she was controlled by their supernatural power and was forced to masturbate in front of their eyes， and also she was derived her pure lips and even she was snatched her virginity by those combatants. In addition to that she was teased and punishmentd by tentacles of combatants who became human beings with spooky ones because of en evil effect by the Supernatural Power Developing Equipment. She was disgraced and about to come so many times， but she was stopped and held immediately before reaching acme. Finally the Sailor-Gorgeous who was shot to come inside of her vagina was wasted her all mental power， and she was turned into a useless bitch who were even ignored by those evil combatants. BAD END