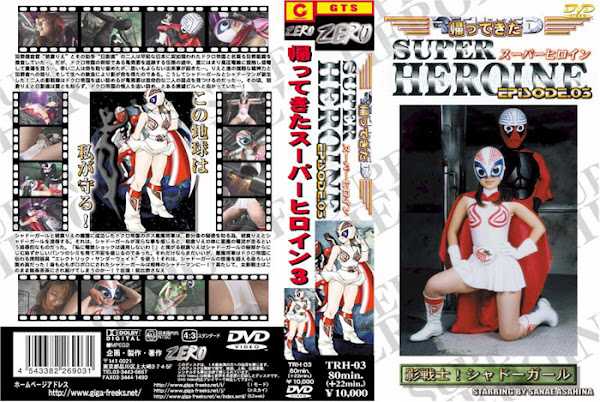 Rie Asakura and Susumu Hikage， the criminal investigators， have been under investigation for a criminal organization calling themselves Dokuro Empire that has sprung up in a peaceful society of Japan. During an operation of tracking Baron Kame， Dokuro Empire’s one of the officials， they got themselves a deep injury due to a trap made of high-voltage electrical lines. They are lucky enough to save their lives， yet something unexpected just happens.... The shadowy energy of both Rie and Susumu has achieved a life and its existence as a result of their pure rage invoked by the criminal in combination with their strong spirits and hope to survive. Here come Shadow Girl and Shadow Man! The two shadow fighters succeed to press Dokuro Empire， but then Baron Kame discovers their a fatal weak point. Meanwhile Rie Asakura and Susumu Hikage drives a genie from Dokuro Empire into a corner， and head to an abandoned building in the dark of a trap awaiting them. Inside the building are Rie Asakura and Shadow Girl captured by the Dokuro Empire’s head Evil General. Then he sexually punishments and tortures them in order to reveal the secrecy of Shadow Girl. What he prepares is a disgrace-evoking apparatus that automatically passes an evil electric current through Rie’s body in responding to Shadow Girl’s detected sexual arousal. ”No electric shock will work on me!”， shouts Rie. But she gets uneasy as noticing a spot emerging around Shadow Girl’s private parts. To make matter worse， Evil General ventures to apply a torture device ”electric sunder weight” which has been handed down in Dokuro Empire! It is indeed a dreadful torture device Shadow Girl never imagined! Completely ruined both physically and mentally， Shadow Girl is now going to deal with Shadow Man who turns to her.... Do these torture and punishment to mess the female fighter go on forever?