THZ-07 Super Heroine to have one's back against the wall Vol.07 Swan fighter 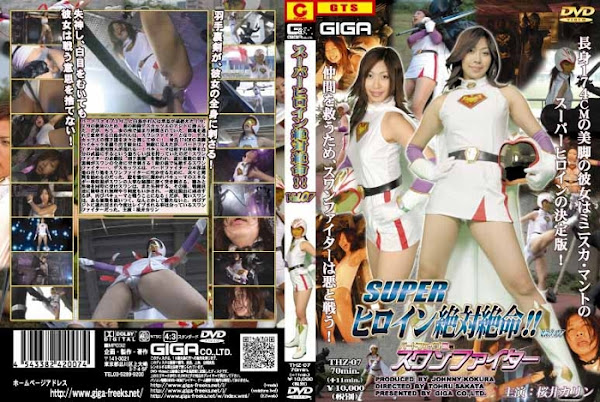 Karen Shiratori as Bird Five 3 sneaked into the hideout of an evil organization ”Deathkatze” to rescue lost Bird Five 1 and 2. But she got caught just a step away and was subjected to torture. Having been off the hook， Karen transforms herself into Swan Fighter and defeats the merry men of Deathkatze! She looks unbeatable judging from the high kicks from her beautiful legs of 174-centimeter-tall body but there appears a monster that serves as eliminating Bird Five...! Vacuumer has a dreadful technique that changes someone’s attack to his own weapon! Swan Fighter is deprived of her special weapon ”feather sword” and in reverse a number of feather swords stick into all over her body! She faints in front of the enemy... Deathkatze sets out a series of torture on her so that she discloses where the headquarters of Bird Five. Swan’s legs are opened by force and Vacuumer’s energy absorbing penis is stuck into her vital private part. She faints once again feeling pain and pleasure at the same time. Soon afterwards， she is assaulted by combatants and forced to reach orgasm over and over again. She once succeeds in escaping but ends up fighting against Vacuumer again! However， clever Swan comes up with some good idea. She knows that unless she wins in one way or another， she will be taken back to the hideout and disgraced this time for sure.

Post a Comment for "THZ-07 Super Heroine to have one's back against the wall Vol.07 Swan fighter"