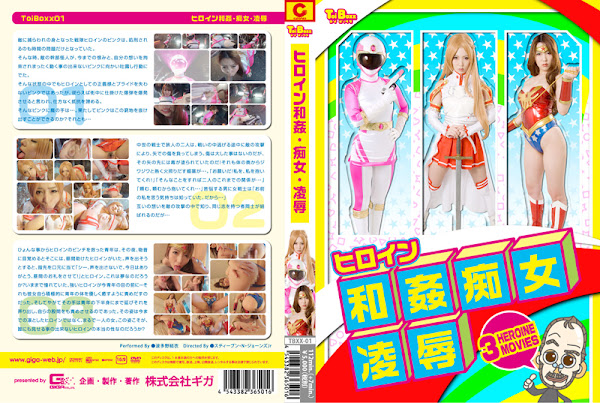 [Part Ⅰ]Pink， a heroine of the Fighting unit， has been captured， and it is just a matter of time when she is going to be executed. But before that， a monster who is the enemy’s cadre pours out old grudge and desire to Pink who cannot move at all， and the monster cadre takes action. Even in such a state， Pink never loses righteousness and pride of the heroine， but the monster tells her that he will explode bombs that he has set up all around the town. So， she drops her resistance to the monster. And evil clutches are about to reach such Pink... Well， is it possible for Pink to get away from this plight? Or... [Part Ⅱ] Two medieval fighters have been on the drift. And in one battle， when they retreat from the enemy， they’re attacked and one gets a wound with an arrow. The wound itself is not serious， but the tip of the arrow was soaked in poison! And actually， it is a love potion that makes burning sensation a little by a little from deep inside of the flesh... ’Please! Pump m-me!’ ’If I do it to you， our old relationship will be torn apart...’ Please， I-I really beg you...’The female fighter tries to persuade the male fighter who sores conscience. ’I know how you think about me， so please...’ Now they find out each other’s feelings under enemy’s fearsome attack， and persons with the same vision enter into a deep relation， but... [Part Ⅲ] One young guy accidentally saves a heroine from the pinch. And at night， he wakes up by some noise， and right there he finds the heroine whom he saved in the daytime. He tries to say something， but the heroine puts a fingertip to the mouth and says， ’Quiet， don’t say anything. Thank you for help today. Let me thank you with what I can do for you!’ Is it just a dream? The heroine whom he’s been longing for a long time is lying in front of him... Also surprisingly， from her choice， she aggressively teases the young guy’s body with gentleness and tenderness. And soon， the hand reaches his lower body， and she plays with it， and makes his thing play between her legs. That figure is not a heroine who is always dignified， but just one of hungry women. Well， it is real sexual behavior of the heroine that has never shown the true character to anyone else before?