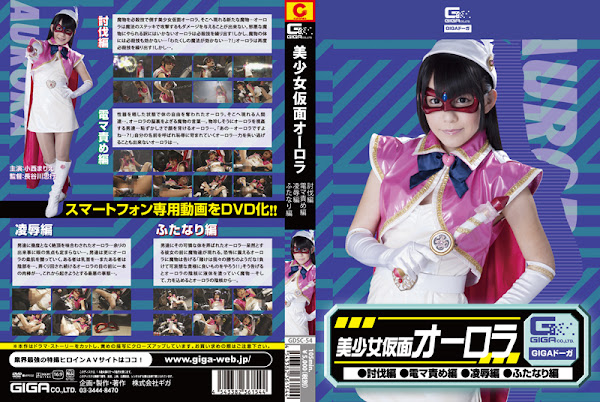 [Subjugation] Beautiful Mask Aurora defeats a monster with her special move. But another monster appears out of nowhere... She attacks her with her magical staff but cannot kill him. Aurora uses her special moves over and over but there is no way for her to win... ’Why does it not work...!?’ Aurora swings her staff once again! And she finds out that her magical attacks are getting absorbed by the monster. After gathering all of the energy， the monster strikes her with it!! Aurora is fatally wounded by her own magic... She tries to use her magic once again... But loses consciousness and gets tied up.’I’ll send you to hell!’ the monster jumps on Aurora... ’Let’s play a game. These men whom you’ve tried to protect， if they have a good will， I’ll release them. If not... hahaha’ Aurora is captured and left alone in the room... [Electric Massager] Aurora is tied up while her vagina is exposed. And several monsters enter... The men observe her body... Aurora turns her face away from shamefulness... ’Excuse me... but are you Aurora!?’ Without her magic， she no longer has the power to escape. She asks for help... ’I understand... I’ll bring you something good’ She feels relieved to hear a kind response， but that did not last long. She hears a weird noise around her genital... The men use an electric massager on Aurora’s body... [Surrender] After the long hours of getting toyed by the men， Aurora was awfully exhausted... They now caress her body. One of them touches her titties... Another touches her vagina... ’No... Please... NOT there...’ Aurora wishes the man to stop pressing his penis into her vagina... [Hermaphrodite] Aurora is in despair... But a new trial awaits her. The monsters appear before beautiful mask Aurora. ’Guess we won the bet! We’ll show you something special for a miserable heroine like you!!’ The monster begins painting something on Aurora’s genital... Her genital starts glowing... Something grows out from her... Aurora begins stroking the thing that grew out of her genital.... AND...!!