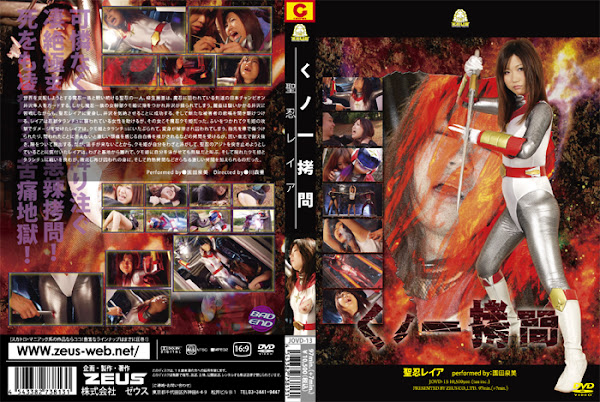 Reia Yagyu is one of the Holy Ninjas continuing the fight against the Devil Ninja Clan that conspires to conquer the world. She is assigned to guard Hayato Izawa， Japan’s Kendo champion sought after by the Devil Ninjas. Spider Princess， a girlie cadre of the Devil Ninja Clan， takes a chance and mind-fucks Izawa. After a hard battle with Izawa， Reia transforms into Holy Ninja Reia and succeeds in knocking Izawa unconscious. She hears cries for help from another victim and rushes to save a girl being attacked by Beast Ninja Tarantu. The girl turns out to be none other than Evil Ninja Spider Princess. Caught off guard， Reia gets hurt by Spider Princess， groped by Spider Princess and Tarantu， and captured after released from transformation. With sticks stuck in nails， she is gagged by a foul stinking， headache-causing odor that induces confession as she gets interrogated for information. Reia manages to endure with her strong will and breaks away narrowly. But， she realizes that her escape is a ploy by Spider Princess to locate the hideout of Holy Ninjas by letting her free. So， Reia runs away from the hideout and yells out to Spider Princess that it is no use to chase her to the hideout. She challenges Spider Princess and Tarantu， loses again and gets imprisoned. Now， Reia is tortured in inferno and by other cruel means. [Bad ending]