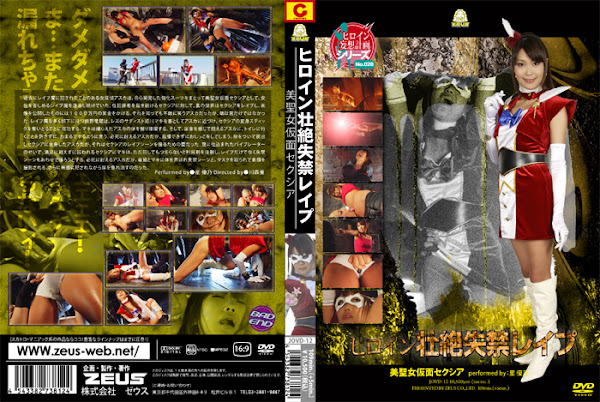 Asuka is a female private detective once assaulted by a serial rapist. To get rid of the rapists terrorizing women， Asuka becomes Masked Beautiful Holy Girl Sexia. Dressed in the armored costume she invented herself， the self-appointed superheroine sentences the town’s sex offenders and carries out punishments on the spot. To fight back， the leaders of the underworld offer a special reward of 10 million yen to anyone who disgraces Sexia， videotapes it and uploads the footage online. Asuka knows their heinous plan and defiantly sneers， but this time she has to deal with not just men. Ryuzou Kumamo， many of whose henchmen are rapists themselves， hires a sadistic lesbian Maki Himekawa. Maki approaches to Asuka posing as a client and steals the transformation stick from Asuka. Maki humiliates and punishments the captured Asuka. Asuka starts fidgeting， feeling a sudden urge to urinate， but Maki wouldn’t let her go to the bathroom， telling her to pee in a potty. Asuka tries to endure desperately， but pees in the end. Then Asuka manages to escape and transforms into Sexia， but this is just part of Maki’s carefully-laid trap to videotape the disgrace of Sexia. A vibrator secretly planted inside Sexia’s vagina is activated， and Sexia is unable to fight and is captured by Maki again. To sadistic Maki， just raping her is not enough. Maki uses a diuretic drug to film the peeing of the superheroine， too. Asuka resists， but after disgraces from Maki and Ryuzou， she gives in. Her peeing and mask peeling are videotaped. Asuka keeps peeing while she is disgraced by Ryuzou. [BAD END]