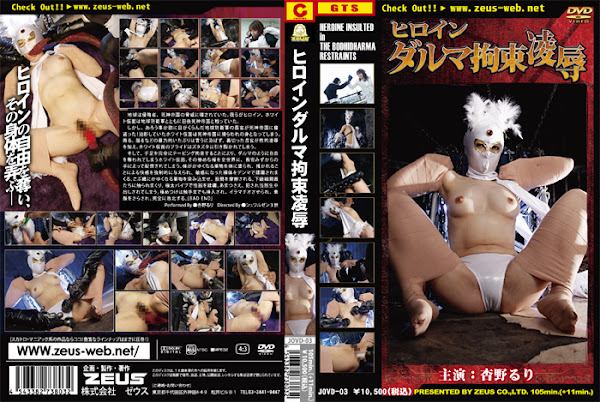 Earth has long been under a constant threat from Death Empire， and it is our heroine Masked White and Earth Defense Force who stand between mankind and the evil empire ... until a shocking event changes everything. Commander-in-chief of the Defense Force got greedy and went traitor! Masked White is caught by Death Empire， completely unprepared and off-guard. She is subjected to a series of tortures including cruel treatments like hitting and kicking， plus sexual disgraces from the commander-in-chief who betrayed her. Pride of Masked White is torn and tattered， but disgrace doesn’t end there， as with her hands and feet bound with duct tape， her enemy deprives Masked White of physical liberty， making her look like a Daruma doll. The image of the captured heroine in disgrace is shot and broadcast all over the world via internet by the traitorous commander himself. A chemical substance that causes itchy skin is painted on her body， and Masked White is forced to experience pleasure of being scratched， and her naked body， now very sensitive， is toyed with the torturer with an electric vibrator. Then a knotty rope soaked with the substance causing itchy skin is pulled between her legs and digs into her crotch. Her body is touched and groped all over by low-rank combatants and she gets her pussy drilled with a huge-sized vibrator. Not only that as she is disgraced and gets cummed inside. Moreover， after tentacle penetration and forced Irrumatio， her face is exposed and our heroine is completely defeated. [BAD END]