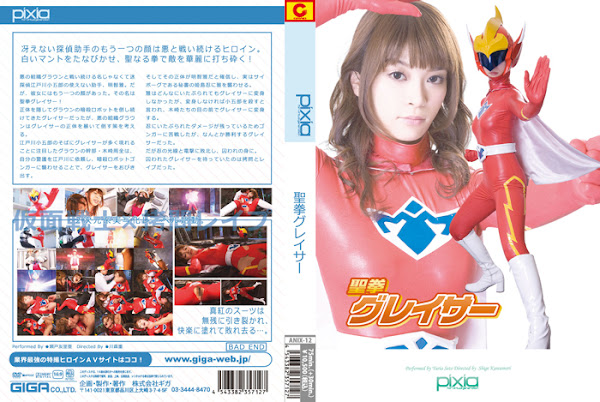 A private detective named Kogoro Edogawa(means a little wisdom man with a big name) is known as a useful one...no， no， actually known as a useless one but he’s fought against one evil organization named the Graun. And a girl named Miyabi Akechi(means a modest girl with brilliant wisdom) is his assistant and unfortunately she is also useless. But， actually she has another face. The name is the Sacred-Fist Glaser! She has hided the true character and kept beating the Graun’s assassination-robots， but now the Graun is working out a plan to find out about the true character and beat her. The Graun’s cadre named Shuzen Kizaki(means totally acknowledged man like nature) notices that the Heroine Glaser frequently appears around a useless detective Kogoro Edogawa， so that Shuzen Kizaki requests Kogoro Edogawa to guard him and tries to lure Glaser with attack of the assassination-robot Congaa. And he is now sure that Glaser is a girl named Miyabi Akechi， and then he orders his sectary named Shinobu Himeshima(means an arrogant ninja like a princess. And she’s actually a cyborg) to attack Miyabi Akechi as Glaser. But Miyabi never transform herself into Glaser even if she is terribly played. Yet she is told that her boss Kogoro will be killed if she doesn’t transform herself， so that she becomes Glaser in front of Kizaki and others. Since damage given by the cyborg Shinobu is remained， Miyabi as Glaser has a close fight against Congaa but she beats it. But unfortunately Glaser is defeated with the Cyborg Shinobu’s light beam and electric shock， and now she’s totally captured. And， what is awaiting Glaser in captivity is hard torture and disgrace. [BAD END]