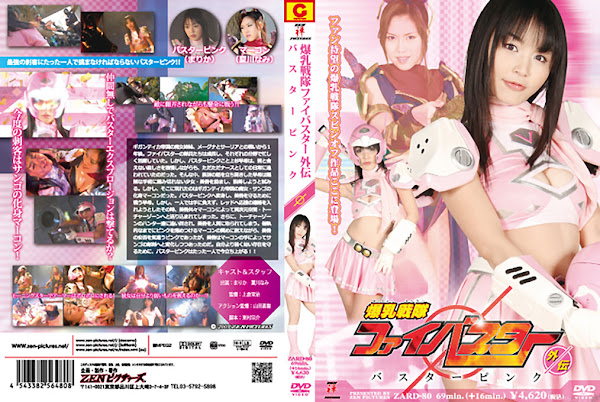 It is one year after a war against the Gigantica Empire’s witch sisters named Merguna and Surlia. Members of the Fi-Busters have grown up， and each member is busily participating their each field. But Saki Uesugi as the Buster-Pink is bearing loneliness because she actually wants to meet other members and to hang around. So she tries to be busy with only working as a nurse day by day. Such a day， Saki overhears a doctor’s story about one little girl named Mika. The little girl cannot take the plunge to accept a very difficult surgery. Saki encourages the little girl and persuades her to accept the surgery. However， Marcon is known as the incarnation of a coral in the Gigantica Empire and appears there. Saki transforms herself into the Buster-Pink and fights against Marcon in order to protect Mika. But the Buster-Pink cannot handle the fight against Marcon by herself and tries to contact with the Buster-Red for help. But at that moment both of the Buster-Pink and Mika are sent into a different dimension space called the Torture-Zone. In addition to that they’re chased by hunters in the Torture-Zone， and Mika is taken away as a hostage. As the result the Pink is captured and she has to bear monomaniac torture by Marcon while she is worrying about Mika’s safety. But Mika is being turned into a coral statue. In order to rescue the much younger and weaker existence than the Pink-Buster， now she stands up and take action by herself!! Here is a spin-off work of the Explosive Tits Warriors that fans deadly desire!