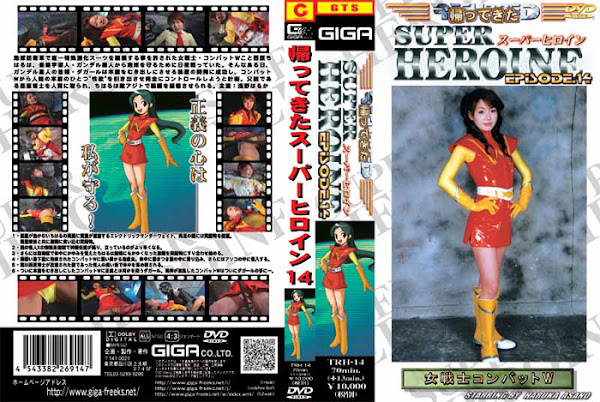 Chiharu Nishihara， as the girlie fighter， Combat W， as the only one allowed in the Earth Defence Force to don the special reinforced suit， has been in battle day in and day out with the invaders from the Planet Gandell. One day， Dagarl， the chieftain of the Planet Gandell， has successfully developed a device that can betray and expose one’s instincts at will. Using the device， Dagarl plans to control Combat W by exposing one of her instincts， sexual desire. With her father Dr. Nishihara taken as a hostage， Chiharu is forced to be attached to the device in the enemy’s hideout. 1. The device does not take effect on her. So， the electric thunder weights are burdened on her shoulder， which gain weight as the time goes by. Between her legs， a bulge is placed that eats into her groin as the weight increases. 2. Trapped in the hellish spider web set by the Monster X， benumbing her nerves， she can barely keep standing up. 3. She is dipped in the foaming bath that makes her skin itching. Trying to take the itching away， she rubbs her legs against the bulge. 4. Combat W is now confined in the dingy cellar where dirty worms assail her by clinging to her body， sneaking under her clothes， and finally invading into her cunt. 5. The Monster X’s long， slick tongue， which is actually Dr. Nishihara as transformed and converted， licks her body all over. 6. Finally， the device has taken effect in exposing Combat X’s instinctive desire. Dagarl keeps asking her what justice is. Cofused in trance， she falls into the hands of Dagarl... Star player: Haruka Asano The movements of the tentacles and the Monster’s tongue are so sickening， while it’s a sight to see where they sneak under her leotard and make their way into her cunt.