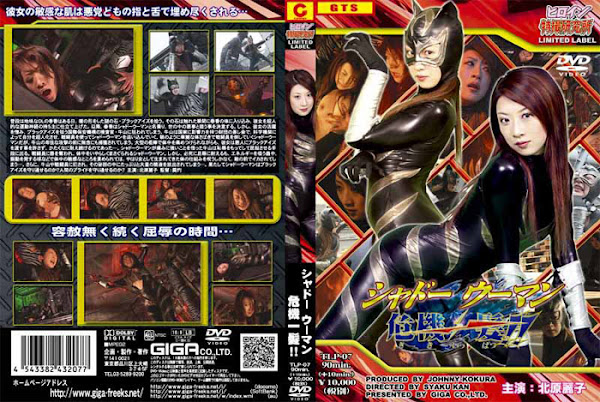 Haruka， ordinarily a nondescript office girl， one day found a mysterious gem stone， Black Eyes， shaped like a pupil of the eye. The moment she picked it up， the stone jumped into her body and turned her into a woman of super human athletic capabilities. Ever since that time， Haruka called herself Shadow Woman and was determined to fight the vices of the world. But， she was chased after by Ushiyama， an investigator of the International Security Organization， searching for the Black Eyes ， who hated Haruka. Ushiyama managed to turn himself into a super human with the help of a scientific organization supported by a foudation having influential power over the government. He directed fighters to corner the Shadow Woman. Nimble and quick like a cat， the Shadow Woman kept zapping the fighters but finally fell under the mean attacks by Ushiyama and got captured. She was subjected to merciless beatings by a heavy club all over her body but bearly eudured the pain without letting go of the Black Eyes to the vicious fighters. Finding that the Shadow Woman was not to succumb to pains， Ushiyama switched the tactics around to putting her to disgrace. Fighters went after her lips， molesting the Shadow Womon’s body all over. While persevering the disgrace， Haruka had to give in at last， with energy-sucking bugs assaulting her and vibrating balls tickling her cunt deep inside. She had only to regret that she had been born a woman， having come in ecstasy in front of the enemies. Moreover， she got disgraced by Ushiyama and the rest of the fighters， who ejaculated plenty of semen into her vagina. Would the Shadow Woman be able to keep the Black Eyes? How could she save her humanly pride?