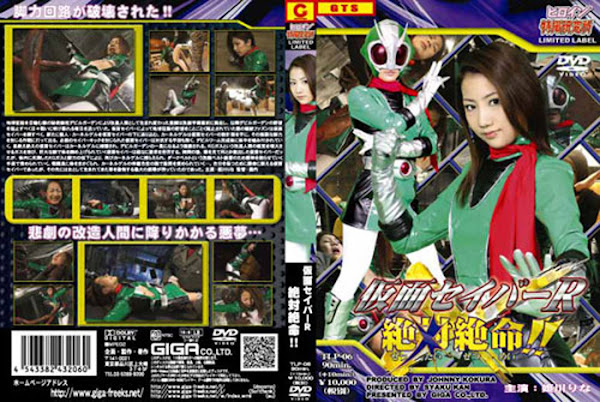 Satoo was transformed into a remodeling human being by an evil secret society named the Devil-Garden plotting to conquer the earth. However， Satoo was escaped from them before their total brainwashing surgery. Since then， Satoo as the Mask-Savior R was fighting against the Devil-Garden all her time to stop their evil ambition. After the evil master Fazun’s ambition of conquering the earth was entirely interrupted by her， he newly sent a monsterKarnegelto knock her down. While Karnegel was looking the monitor of her fight against his combatants， he checked her blueprint; and made a sally to seal her powerful legs. He set the mechanical bomb worm called the Gel-Worm to the Mask-Savoir R who was paying only attention to the combatants， and he succeeded to sneak it into inside of her; and destroy her legs’circuit by the bomb worm. After Karnegel had a clear advantage over her， he started to surrender her so badly. After the Mask-Savoir R lost the Deadly-Savoir-Kick that had no more enough power to fight back， she had no resistance against their nasty attack by the perfect bodied worm called the Devil-Worm which was biting all over her body. Finally the Mask-Savoir R who was just breathing so weak was captured by Kaenegel， and she was forced to be a member of the Devil-Garden. She mulishly rejected their evil demands even if she was dashed over the KG-Gas that had power to accelerate the sense of pain against the remodeling human being， and also squeezed by a giant scissors. However， after their astonishing serious torture， she fortunately succeeded to escape from them under their unguarded moment. But she was again captured by Kanegel because she had been fulfilled the KG-Gas inside of her， and also her legs had been damaged so badly. Then she was installed a brainwashing gear called the Dark-Belt by them. And they surrendered her with it gradually in order to weaken her straight mentality. After that she was groped by the combatants harshly， and she was surrendered to her tiny crack by Kaenegel’s elastic and fabric arms... The Mask-Savoir R tried to endure it and kept herself as much as she could， but after that there was the biggest disgrace waiting， which made her seriously regretted that she was born as one single woman.