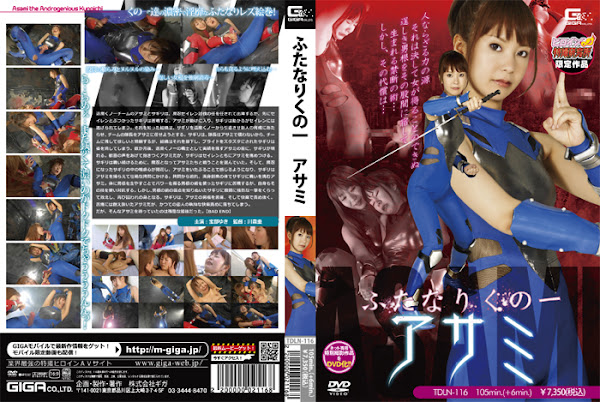 Asami and Sagiri are members of the evil conquest female ninja team， and now they undertake a mission to subjugate an evil ninja named Seiren; however， Sagiri fights against Seiren at first but she has a close game. Asami goes into help， and though Sagiri is saved， they miss Seiren. Two girls’ organization gets to know it and makes Sagiri to retire from the evil conquest female ninja team and now charges her of training of newcomers， and the organization decide to leave the captain of the team to Asami. Though Sagiri doesn’t mind Asami is going to be the captain of team and she asks them to leave her to the team， the organization will dismiss it， so Sagiri is made into pieces in pride and she disappears somewhere. Then， after a couple of months， Sagiri appears in front of Asami who leaves a track record as the fighter of the evil conquest female ninja. Asami raises the voice of joy and clings Sagiri， but Sagiri hurts Asami with Seiren. Asagi has become an evil female ninja and chosen fighting against Asami and others in order to continue fighting. And in addition to that flavor of ill-treatment mind in Sagiri has bloomed after she has become the evil female ninja， and now she comes to feel by threatening Asami， and Sagiri catches Asami and applies her to sublime torture. However， Asami somehow escapes from the torture， and she challenges Sagiri to a battle even if her entire body is covered with wounds. Asami has a close contest against Sagiri who utilizes a ninja technique called the Man-Penis-Building which grows a penis on her body and gains power， so Asami also utilizes the ninja technique， the Man-Penis-Building and stands up to Sagiri. However， Sagiri has a thorough knowledge of the weak point of the Man-Penis-Building technique and gives an intense blow on Asami’s crotch and succeeds in defeating her and captures her again. Sagiri keeps teasing the penis of Asami with both a pain and a pleasure. Though Asami keeps bearing the pain， she is fallen to an obstinate pleasure-teasing of a once sweetheart， in fact. And the cruel last is waiting for such Asami. [BAD END]