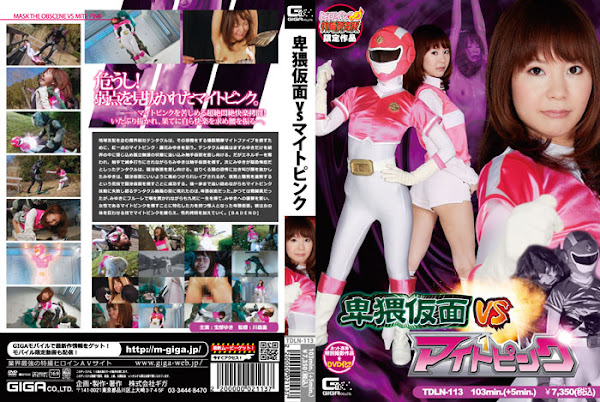 The evil world association named the Tentacle has been plotting world domination， and now in order to beat the Explosive-Fighting-Unit named the Might-Five who hinders their evil plans， they aim at the sole female fighter named Miyuki Takahana(her last name means Eagle-Flower) known as the Might-Pink. At first， President Tentacle shuts up only Miyuki into the evil magical world and drives her into the state of alone and unaided， and dispatches the Tentacle-Mask. Her energy is derived and her body is beaten the shit out of， but she succeeds in beating the Tentacle-Mask. Next， President Tentacle finds that she’s a cat phobia and dispatches the Cat-Tusk-Mask. Miyuki cries， screams to the coming fear of the cat and she is petrified with the terror， and she is hurted as way the mosnster likes and she is disgraced. But she succeeds in beating the Cat-Tusk-Mask by a power technique of intercepting vision and hearing. In spite of chasing down the Might-Pink to only a last step， President Tentacle fails terminating her and gets angry at it. But in front of President Tentacle， the Indecent-Mask appears. He was once the combatant， but he had a narrow escape from death after he was poked his throat with a fleuret (a kind of a poking sword) by the Might-Pink. Since that， the Indecent-Mask has been promising the revenge and becoming a monster with a power which specializing beating down the sole female fighter， the Might-Pink. He catches the Might-Pink with a technique which puts a female’s body out of order， and adds sexual torture. [BAD END]