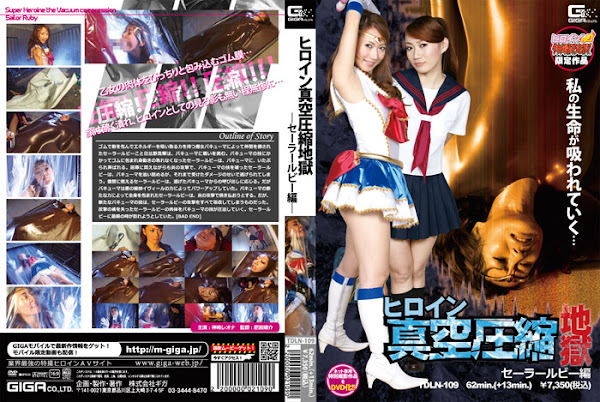 Witch Vacuuma has the power to suck in all energy by wrapping up her enemy in rubber. Maki Hibino， aka Sailor Ruby， challenges Vacuuma， having one of her colleagues felled by her once. Vacuuma overpowers Sailor Ruby with the rubber which makes any moves impossible. She gets molested by Vacuuma， but while being humiliated， attacks with her flames and gets away from Vacuuma. Sailor Ruby now chases Vacuuma to a corner but lets her get away because of lack of power. Aflame with revenge， Sailor Ruby responds to Vacuuma’s call to fight. But， with her power beefed up by her boss Evil， Vacuuma envelops Sailor Ruby’s whole body. Sailor ruby tries to fight back with flames， but Vacuuma has by now acquired the power to suck up Sailor Ruby’s attack energy. Beat and deprived of fighting power， Sailor Ruby’s body is now compressed by Vacuuma， with her end near in sight. [Bad ending]