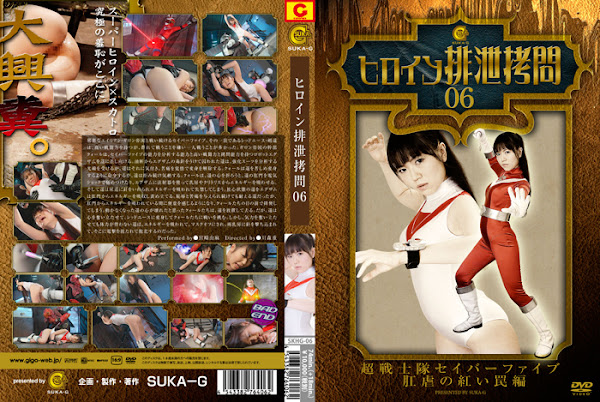 The Savior-Five has been fighting against a vicious alien named the Gallon Empire. One of the righteous member named Haruka Tsurugi(means a superior sword) as the Red-Ace has superior combat efficiency， but she hates to fight in crowds and often prefers to fight alone. A cadre of the Gallon Empire named Quarle sends a robot named the Exam that has capability to analyze fighting efficiency of the Savior-Five and has superior fighting efficiency and also torture capability. Haruka accidentally relaxes her guard and receives the Exam’s poison needle and gets captured. She receives light ray on the strengthening suit but she senses it， and even she expects pain， she cancels the transformation. The cadre Quarle makes Haruka suffer and orders her to make transformation， but Haruka keeps a refusal and finally faints. For the sake of cutting up Haruka’s heart， Quarle hearts Haruka’s anal with electroshock， and also makes the Exam suck Haruka’s energy from the tits and the clit with an injection syringe. Then， Haruka has a needle inserted into the urethra and sucked the energy， and she leaks urine. The Exam tortures Haruka who is in an abstracted state by means of sucking energy from her anal. Haruka somehow bears even both disgrace and pain is given endlessly， but while she has the energy sucked from the anal， she desperately feels a need to evacuate her bowels and unexpectedly passes a stool right before Quarle and others. Quarle and others reckon that Haruka has gone to pieces in stationary state， so they leave her and take themselves off. But Haruka calls forth and transforms herself into the Red-Ace， and tries to fight， yet contrary to her guts， Haruka is short of physical strength. Again she has the energy sucked， the face mask taken， a needle shot into the tits and then heavy electroshock released， and she completely loses a battle. [BAD END]