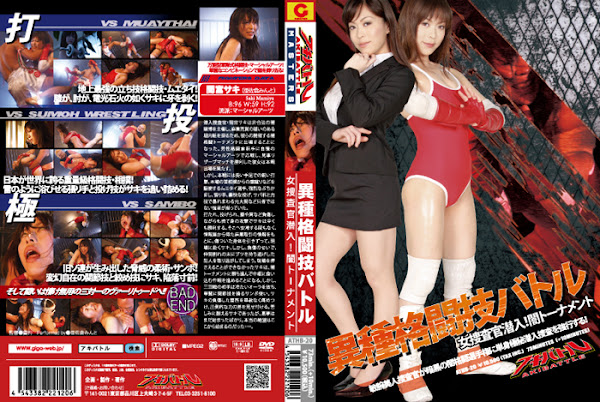 Saki Mamiya is an undercover agent. She enters the underground martial arts tournament organized by gangsters Horiuchi-Gumi in order to investigate the clan’s shadowy business. She suspects that they are running a gambling den， and also selling and buying illegal drugs. Saki wins the battle in the preliminaries against the male martial artist using her formidable fighting skills， and advances to the finals. The fight gets much harder as Saki battles her way up， however， as Saki is confronted by a group of unusual fighters such as a Muay Thai fighter who can hit Saki using his long limbs and， like genuine Thai boxing fighters do， deftly give her a knee kick while clinching her with his hands around the neck. Also， she has to defeat a huge sumo wrestler， former ozeki champion employing various forceful moves like a heavy charge using the head， a slap with an open hand， as well as big moves like sabaori， forward force down. She is hit， punched and thrown across the mat again and again， but despite the numerous wounds in the knees and shoulders， Saki fights back desperately and wins the battle in the end. Exhausted and wounded， Saki has no time to rest because， tipped by an informant， she sets out to the scene of a drug deal. There the criminals start fighting among themselves and one of them snatches the drug and runs away， but she fails to arrest him because of her injury. As her original plan to arrest the gangs on the scene failed， she must continue to fight in the underground tournament so that she could infiltrate the organization. Her opponent in the third round is a sambo master radiating a cool aura， with tactful joint locking techniques. Saki is no match for the new enemy who attacks the injured parts of her body ruthlessly. Saki endures the incredible pains， but her nightmare has only just begun. And her real despair too.... [BAD END]