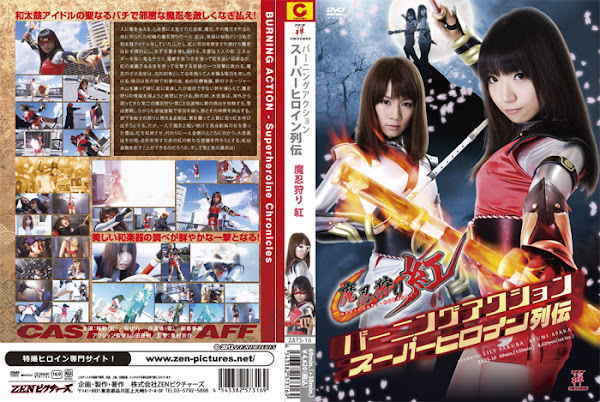 The Evil-Ninja are ones whose spirit are ruled by evil， and harm human beings. A female ninja Kuranai(means Rouge) is one of hunters in an organization which has been set up to hunt the Evil-Ninja. But usually， Kurenai is an idol of Japanese drum by the name of Suzu Sakura(means a cherry’s bell). But， the Evil-Ninja， which are having distress to Kurenai， makes her a target， and sends an assassin ninja named ZetsuRai (means a thunder tongue). ZetsuRai uses ninja techniques such as the Three-Person’s Shadows， the Ninja House-Lizard which sucks energy， and the tongue which releases thunder electricity. And ZetsuRai corners Kurenai but is defeated with one of the Double-Sound-Wave Attack that is her ninja mystique. Next， a boss of the Evil-Ninja named Kongo(means gold steel) sends Suppa(means sucking like feathers) who sucks blood to control humans， as the next assassin. At first， Suppa attacks these three people: Suzu’s older sister Megumi(means boon) who is an detective， Megumi’s co-worker Goto(means latter blossoming wisteria)， and Suzu’s manger named Hiyama(means trees on a mountain). Suppa controls them， and catches Suzu， who transforms herself into Kurenai but cannot resist Suppa. Now Suppa tortures her to get secret information of the Evil-Ninja hunting. But meantime， Suzu’s teacher named MokunenSai(means a wise man like wooden deities) requests Suzu’s rescue to the second Evil-Ninja hunter named Mei Shiranami(means a song of white waves) as Yuki(means white as snow). Then， Yuki has a close fight， but somehow defeats Suppa with the Sound-Breaking-Tearing Technique， and rescues Suzu and the fellows. A boss of the Evil-Ninja， Kongo burns with anger owing to the subordinates’ death， so Kongo attacks Suzu’s older sister Megumi again and takes her hostage and tries to call Kurenai. But， Yuki takes thought for Kurenai， who has been fighting the Evil-Ninja and been covered all over with wounds， so that Yuki intentionally makes Kurenai lose her senses and instead of Kurenai， she goes to a place where Kongo is awaiting. At the same time. Suzu’s teacher MokunenSai tries to make a new arms for Kurenai to beat Kongo. Well， is it possible for Kurenai to beat Kongo? And how are fates of Yuki and Megumi!