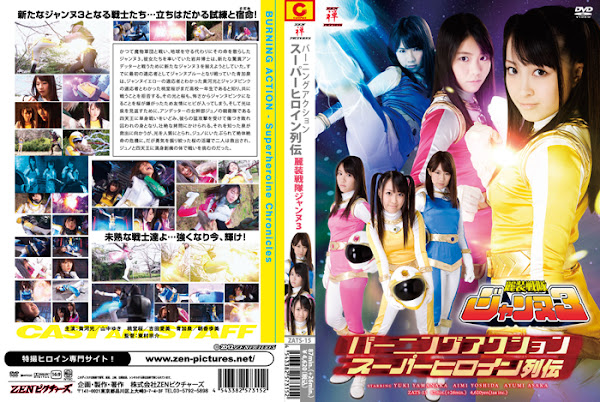 Once， the fighting unit called the Jeane3 fought against the Devil Army， and lost their lives in order to protect the earth. Dr. Iwai (means a well made of rock) is one who led the Jeanne 3. Now he is about to arrange the new Jeanne 3 in order to fight against new threat called the Undeader. A girl named Izumi Aoka (means deep blue fountain) has become first adapted fighter and she’s fighting as the Jeanne-Blue. Now she meets two new adapted fighters; one is Hikaru Kouga(means shining Hwang) as the Jeanne-Yellow， and another is Sakura Momodo(means cherries along with full of peaches) as the Jeanne-Pink. But Isumi Aoka as the Jeanne-Blue finds out that they’re still the first year of senior high school， and refuses to fight with them. In addition to that， one day， Sakura cannot become the Jeanne-Pink because of some fearful hesitation， so that the incident accelerates Isumi’s claim and also causes a spilt in friendship between Sakura and Hikaru. Hikaru now desperately wants to put such Isumi to shame， so she solely goes to fight against the enemy’s four devilish kings that are also old guards of the Undeader’s female cadre. But Hikaru seriously gets the slashing attack and gets damaged， and she’s defeated and totally captured and then she is put into sublime torture. Izumi as the Jeanne-Blue notices it and goes to rescue Hikaru， but contrarily Izumi is harassed by Genot because Hikari is in hostage， and Izumi is driven to the wall. But Sakura as the Jeanne-Pink calls up her courage， and with big-miracle-activity the two fellows are rescued. And now they fight against Genot and the four devilish kings， while they’re covered all over with wounds.