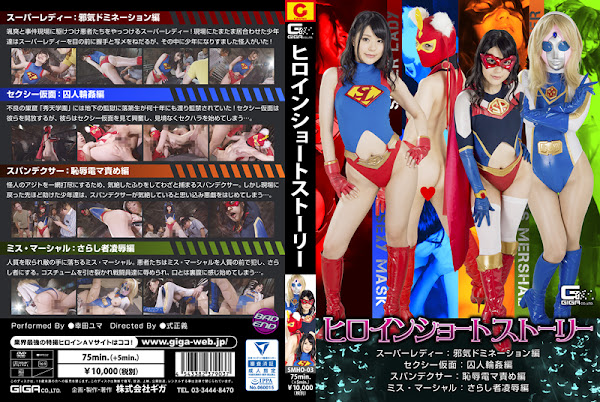 [Super Lady : Evil Domination Part] Super Lady rushes to the crime scene to beat evils. Boys happen to be there and they ask her to shake hands or take pictures. People starts taking contacts with Super Lady happily. However a monster has pretended to be a boy and tries to torture Super Lady by asking her to do a contest of strength… [Sexy Mask : Prisoner Mass Attack Part] A den of bad boys， Syuten Academy has a terrifying secret. Bad students have confined to prison in the deep basement for several decades. Sexy Mask is purposely captured by discipline committee of the academy to rescue those students. Finally she releases bad students from prison. However students are excited to see Sexy Mask’s body because they haven’t seen a woman for a long time. They mindlessly start touching her body and finally it escalate into the gang disgrace…[Spandexer : Vibrator Surrender] Spandexer fights with a monster who tries to kidnap a boy. She almost beats the monster but then she hits on an idea that she is purposely beaten by the monster and is abducted to the monster’s headquarters for making a wholesale arrest. So， she pretends that she lost consciousness and is captured the monster. However unexpected thing is happened. The boys who were rescued Spandexer a while before return the site with their friends to be onlooker. They think Spandexer is unconscious and starts playing a trick to her. they find vibrator was disposed near there， and tries it to her… [Ms. Martial : Disgrace Surrender] Ms. Martial is captured by an opponent because he takes a hostage. Evil’s purpose is only one that they disgrace Ms. Martial in public to expose her. she is surrendered with tearing her costume by combatants forcibly. She deeply feels shame but masochistic mind gradually occurs to her. Finally she gets laid with a hostage forcibly. [BAD END]