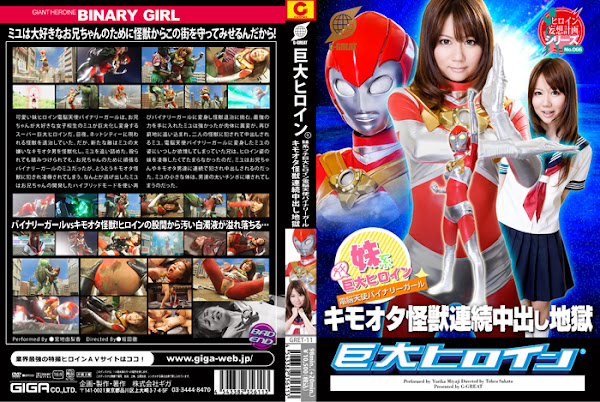 Miyu is a schoolgirl who loves her big brother. She also transforms into cute Sister Petite Giant Heroine， Cyber Angel Binary Girl， a super-giant heroine fighting monsters that attack Net City like every day. But the enemy creates a new monster out of a ‘kimo-ota’ (creepy otaku geek) Miyu abhors. The ‘Kimo-ota’ monster quickly drives Miyu into corner， hitting and stomping her. A brave girl Miyu/Binary Girl does her best， trying to fight for her dear big brother， but is humiliated and disgraced by the monster in the end. Miyu manages to escape and， using the hybrid mode her big brother invented， she transforms into Binary Girl again to take down the monster. With the special powers given to her， Miyu has become a strong fighter. She finds herself in big trouble， however， when something goes wrong with her body， and Miyu is disgraced and cummed inside by two monsters this time. The fact is that feeling strong sexual desires for Cyber Angel Binary Girl， her big brother also wanted to disgrace his young sister in her superheroine form. Miyu is disgraced and cummed inside by her brother and kimo-ota geeks again and again， until her small body is broken down by these guys’ huge-sized dicks. [BAD END]