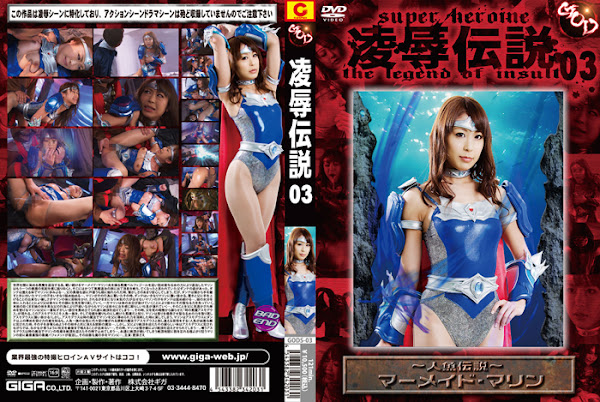 The Mermaid-Marine fights in order to clean up devils that are trying the world to be darkness! One day， she corners a devil named Verfegoal that controls fire， and she cleans up the devil with the saint waterpower. But she gets wind of another devil and glances around. And then she sees her father named Dante who lost contact and seemingly died after he set off on a journey to clean up devils. Dante walks up to Marine while he is trembling... She perplexes her father’s strange figure， but she feels easy right after he touches her cheek with tenderness. Yet， after he gets his hand off of her cheek， he suddenly starts licking Marine’s sweat on his hand... The moment Marine is surprised at the deed， Dante suddenly attacks Marine. But she represses her own body because she is so stunned and also she has tenderness like she cannot hit her own father. So as much as Dante wishes， he keeps licking Marine’s sweat while she cannot exert the full ability... Then， Her father Dante graudually gains animation in his face and recovers life while putting the daughter’s sweat in the body. Meanwhile Marine loses the saint power by drying out gradually... Marine perplexes by catting of her father who covets the daughter’s body on instinct， but she gradually feels female sexual orgasms and starts leaking dirty pant voices. Her father notices it and gives her surrender of torturing her most shameful spots. And then she finally reaches the climax... Then， next off， appears ’Time devil named Assmowdeus’ that made her father revived from darkness of the death. She now finds out that Assmowdeus is the devil played cat with the Mermaid tribe and also her mother， so that Marine blows up in anger and tries to take back the saint waterpower， attacking Assmowdeus! But Assmowdeus uses the time-magic and puts back the clock when she exhausted the saint power by her father’s disgraceful acts. Marine notices a big difference in power by receiving Assmowdeus’s surrender which is much more than Dante’s， but she makes up her mind to die by falling upon each other’s swords with prohibited magic that has been succeeded to women of the mermaid tribe for generations! Actually， this is prohibited magic that when a mermaid is disgraced by a vicious enemy， she vanishes with the opponent in order that she won’t carry the baby... But with her obscene body that has been come by her father once and also now is being disgraced by Assmowdeus， she cannot chant the magic word until the end in her own way... Then she is come highly by the hateful enemy... Assumowdeus laughs at such Marine， and with the time magic， he stops the clock when her sexual sense reached the acme... Marine goes crazy with twisting the body because she almost forgets herself by the reaching-acme hell which is just like lasting forever. Then， in front of such Marine， the worst and strongest devil named Bafomet revives， and reaches the evil hand to Marine... [BAD END]